Sarang Semut or scientifically known as  Myrmecodia Pendans is an epiphytes plant. An epiphytes plant is a plant that is attached to other larger plants. However, it is not a parasite and does not kill the host plant. Ants have been found living 0n the Myrmecodia Pendans. The plant are known by several other names such as Rumah Semut (Sumatra), Ulek-Ulek Polo (Java), Lokon, Suhendep, Nongon (Papua), Periok Hantu, Peruntak, Sembuku (Malaysia), Bay Ki Nan, Ki Nam Gai, Ki Nam Kin (Vietnam).

This plant belongs to Hydnophytinae (Rubiaceae) family and is made up of an ant sized maze inside the plant where the ants carry out their daily activities. This is the unusual part of the plant and on top of that it is also known for its amazing medicinal qualities.

Sarang Semut was first discovered in the rural areas of Papua located in Eastern Indonesia. It is commonly used by the local people in Papua New Guinea. Sarang Semut is often cooked with porridge in its homeland and blended as a drink in order for the Guineans to consume it in order to strengthen their body’s immune system. The plant have also been used a medicine to treat internal problems. The plant have a wide geographical reach and have been discovered in Peninsular Malaysia, Philippines, Cambodia, Indonesia, Australia as well as Solomon Island.

Technically, immune stimulant substances will help and protect the body cells so that they can perform their jobs well. This will prevent cell disruption diseases from growing. Cancer is such a disease and Sarang Semut is believed to be a good medicine for its prevention and treatment.

Sarang Semut belongs to Rubiaceae family with 5 genuses. However, only 2 is found to be associated with ants. They are Myrmecodia (45 species) and Hypnophytum (26 species). From those species, only Hypnophytum Formicarum, Myrmecodia Pendens and Myrmecodia Tuberosa have been found to contain medicinal value. The part of the plant being used as remedy is its hypocotyl (caudex) and is consumed by drinking its boiling water (decoction).

The content of substances in Sarang Semut is supported by the activities of ants in it where a lot of beneficial substance left behind in the plant. The herbal efficacy marked with active substances such as antioxidants (vitamin C, flavonoids, tannin, poliefenol), polyphenols, and glycosides. All of these three substances help the human body to control various deadly ailments. In the ants themselves, antioxidants act as an important substance for the formation of colonies. And one of them acts as a stimulant to increase the immune system. Besides those active ingredients, Sarang Semut also contains several minerals such as tokoferol (vitamin E), magnesium, sodium, potassium, phosphorus, calcium, calium, iron, and zinc.

This condition is similar like honey produced by honey bees to protect their eggs which named Sarang Lebah. In Sarang Semut, the efficacy most likely derived from salivary glands of ants that interact with plant and some other microbes.

Moreover, the herbal ingredients can inhibit antioxidant enzymes that can trigger uric acid and free radicals. For diabetics, this plant can also become a must-try alternative because the substance content produced by ants can neutralize the blood sugar levels. 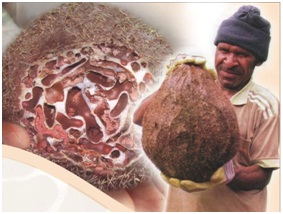 A. Original Taste:
The chemical compounds inside Sarang Semut gives out a bitter taste.
B. Possible Mixture with Other Herbs and Ingredients:
Because of its bitter taste, it may be added or mixed with honey or sugar.

C. Cooking Method & Dosage:The basic method of preparing the Sarang Semut is given below:1. Take 3-4 pieces or 100 grams of Sarang Semut.2. Boil and cook it in 3 liters of water for 30 minutes.3. Remove, filter and drink the juice portion like tea consumption.

Traditionally, local people in Papua consume Sarang Semut by mix it with porridge. It is also used as a drink by boiling the dried Sarang Semut. Nowadays, Sarang Semut is being consumed as a tea powder packed in sachets or also as a drink. Besides that, it is also widely available in herbal supplement in the forms of capsules and tablets.

Pregnant women are not advised to consume.

There is no side effect found in the previous research.